Goal of the AS Rank project

Independent networks (Autonomous Systems, or ASes) engage in typically voluntary bilateral interconnection ("peering") agreements to provide reachability to each other for some subset of the Internet. The implementation of these agreements introduces a non-trivial set of constraints regarding paths over which Internet traffic can flow, with implications for network operations, research, and evolution. Realistic models of Internet topology, routing, workload, and performance must account for the underlying economic dynamics. Although most interconnection ("peering") agreements between networks are secret, some information can be inferred from traceroute-derived and BGP-derived Internet topology data sets at IP, router, and AS granularities. (For additional details on economic modeling, See our recently proposed research on the economics of Internet transit and peering interconnections.) AS rank uses these data sets to estimate a macroscopic ranking of Autonomous Systems based on a measure of their influence in the global routing system, specifically the size of their customer cone based on inferred business relationships among ASes. We explain these concepts in more detail below.

An AS's rank is based on it's customer cone size, which in turn is is inferred from BGP paths by CAIDA's AS relationships inference algorithm9.

An AS's rank is equal to one greater than number of ASs with larger customer cone sizes or degrees. So ASes with equally large customer cone sizes and degrees will have the same rank. In such a case, the rank will increase by multiple steps "after" a sequence of equally-ranked ASes.

Degree is the number of neighbors that a node, an AS in our case, has in a graph. There are various types of degrees: global, out, and transit. These degrees are applied to an unlabeled graph and so edge types are ignored. Specifically, a global degree is a standard degree in which all of an AS's neighbors are counted. out and transit degrees, however, change based on the observed paths. For example, out degree only counts neighbors that follow the AS in the path and transit degree only counts neighbors that are found in at least one path where the AS is in between that neighbor and another neighbor of the AS.

figure 2. Types of AS relationships. The ASes at the bottom of the graph, D, E, and F, are customers of those above. ISPs in the middle, B and C, are both providers of ASes below and customers of ISPs above. ISPs B and C are also peers of each other. ISP A at the top is a provider to B and C and a customer of no one.

Although business agreements between ISPs can be complicated, the original model introduced by Gao 1 abstracts business relationships into the following three most common types:

The justification for this classification is that an AS must buy transit services for any traffic destined to parts of the Internet that this AS neither owns nor can reach through its customers. In Figure 2, arrow directions reflect flows of money -- ASes at lower levels are customers who pay ISPs (providers) at higher levels in exchange for access to the rest of the Internet, also known as transit. We refer to links between a customer and a provider as c2p (p2c) links. In Figure 2, D->B, E->B, F->C, B->A, and C->A are c2p links.

A p2p link connects two ISPs who have agreed to exchange traffic on a quid pro quo basis. Peers should exchange traffic only between each other and each other's customers. Peering allows growing ISPs to save money on transit costs they would otherwise have to pay to deliver traffic to/from their customers. In Figure 2, B-C is a p2p link, unidirectional since neither B nor C pays the other for the traffic they exchange.

An s2s link connects two ASes with a common administrative boundary. Such links usually appear as a result of mergers and acquisitions, or under certain network management scenarios. 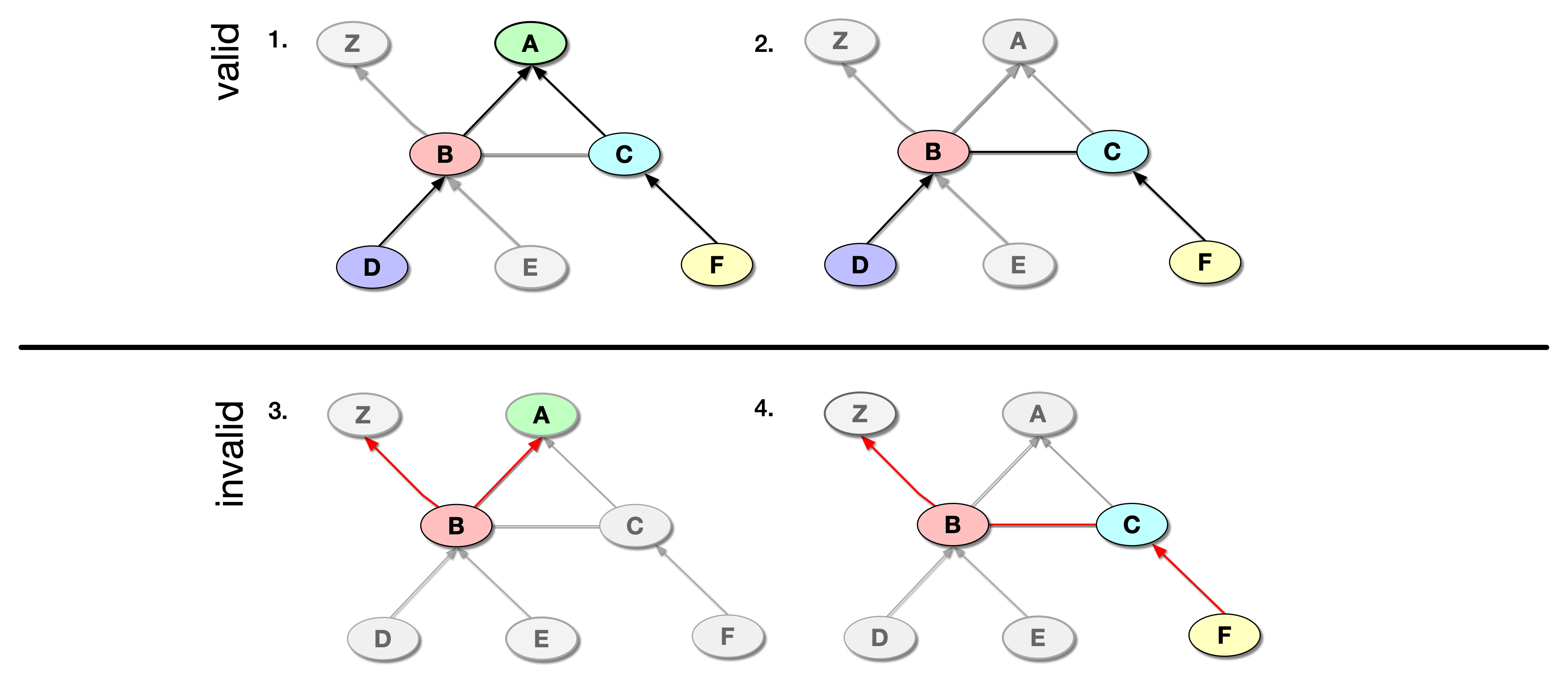 We use the notion of money transfers between ASes to define valid and invalid AS paths. A valid path between source and destination ASes is one in which for every ISP providing transit (a transit provider), there exists a customer immediately adjacent to the ISP in the AS path. An invalid path has at least one transit provider not paid by a neighbor in the path.

Gao's1 pioneering work inspired many researchers to seek approaches to inferring ISP business relationships using information from publicly available BGP routing tables. Gao used the concept of valid paths as the basis for her inference heuristic and identified the "top" provider in a given path based on AS degree (the number of ASes with observed connectivity to a given AS).

Subramanian et al.2 provided a more elegant mathematical formulation based on the concept of valid paths, but they simplified the problem by not inferring s2s links. Using maximization of valid paths as an objective, they formulated the AS relationship inference problem as a combinatorial optimization problem: given an undirected graph G derived from a set of BGP paths P, assign the edge type (c2p or p2p) to every edge in G such that the total number of valid paths in P is maximized. They called the problem the type-of-relationship (ToR) problem, conjectured that it is NP-complete, and provided a heuristic solution.

Di Battista et al.3 and independently Erlebach et al.4 proved that the ToR problem is indeed NP-complete. The latter proved also that it is even harder, APX-complete. More importantly for practical purposes, both studies demonstrated that p2p links cannot be inferred in the ToR problem formulation, and they developed mathematically rigorous approximate solutions to the ToR problem but inferred only c2p and p2c links. No technique thus far reliably identifies p2p links.

Dimitropoulos, et al.6 identified still other issues with the ToR formulation, like the random breaking of ties which can yield obviously incorrect inferences, e.g., well-known large providers are inferred as customers of small ASes. In the first paper6 we handled this issue with multiobjective optimization techniques that incorporated AS degree into the inference. In a subsequent paper7 we introduced improved algorithms that determine not only c2p but also p2p links (for those we can detect from BGP data). These improvements achieved more accurate AS relationship inferences, which we demonstrate against ground truth for a set of ASes. Benjamin Hummel and Sven Kosub 8 introduced the idea that the resulting graph should be acyclic, i.e. should contain no cycles, and presented a new algorithm that does the assignment and reduces the number of cycles. Our current technique creates no cycles, but at the cost of ``valid'' (valley-free) paths in the graph. M. Luckie et al.9 dropped the valley-free assumption and instead relied on three assumptions about the Internet's inter-domain structure: (1) an AS enters into a provider relationship to become globally reachable; and (2) there exists a peering clique of ASes at the top of the hierarchy, and (3) there is no cycle of p2c links.

One metric of the resulting AS relationship graph that allows comparison across ASes is the customer cone -- the set of ASes, IPv4 prefixes, or IPv4 addresses that can be reached from a given AS following only customer links. 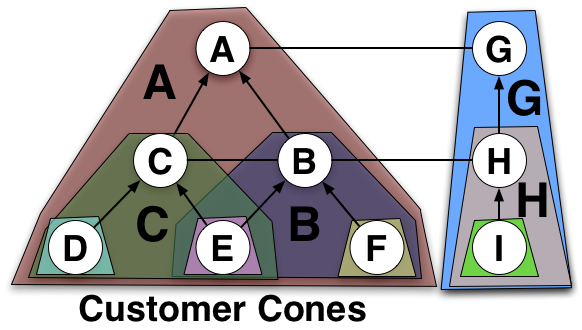 figure 4. This graph shows the respective cone sizes for each AS in the graph.

Figure 4 depicts several AS customer cones, ASes D, E, F , and I all sit at the bottom of the hierarchy and so only have a single AS in their cone. H ranks a little bit higher with 2 ASes. Both C and B tie with 3 ASes. Note that B and C both have E in their respective cones. A is ranked at the top of the hierarchy with 6 ASes in its customer cone.

figure 5. shows the effect on customer cones of changing the relationship of A to B from its current one to a peering relationship.

Figure 5 illustrates how different relationships affect the customer cone sizes of AS A and B. If the original graph had B as a customer of A then A's cone contains 7 ASes: A,B,C,D,E,F,G. B's cone contains three ASes:B,F,G. If the link between A and B is changed to a peering link, A loses customers B and G, which it had access to exclusively through its customer relationship with B. A's cone does not lose F, since it can still reach it through its customer relationship with C. A's cone size thus shrinks to 4 ASes:A,C,D,F. Since AS B did not previously reach any customers through A, its customer cone is unaffected by this change.

figure 7 Coordinates of AS in AS core visualization.

The CAIDA AS Core visualization depicts the Internet's Autonomous Systems' (ASes) geographic locations, number of customers, and interconnections. Each AS approximately corresponds to an Internet Service Provider (ISP). The geographic location of the individual AS is inferred from the weighted centroid of its address space according to NetAcuity, a commercial geolocation service. The number of direct or indirect customers of an ASA is inferred using its customer cone (described below).

Each AS node is plotted in polar coordinates (radius, angle) on the circle, as formally defined in the equations below. The distance of each AS node from the center of the circle (the radial coordinate) is the inverse of each AS's customer cone size, (roughly) the number of the AS's direct or indirect customers. ASes at the outer edge of the circle have no customers and ASes at the center have the largest number of customers. The angular coordinate indicates the AS's geographic longitude.

Each AS is placed according to the longitude of the centroid of its announced address space. This is representative of the area where NetAcuity inters the majority of this network's activity occurs. 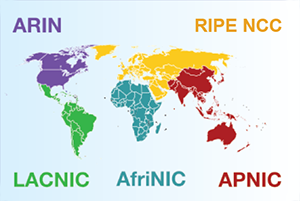 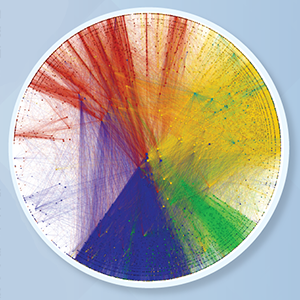 The Regional Internet Registries (RIRs) manage allocation and registration of Internet number resources, such as AS numbers, within a particular region of the world. Although most ASes geolocate to the region of the originally allocating RIR, some multinational networks, e.g., AS3257 (Tinent) geolocate outside their region.

Although we know of no more rigorous empirical analysis of macroscopic Internet topology enriched with AS relationships, we recognize that resource limitations constrain the quality of the science we can do.

In the future we would like to improve the integrity and utility of the relationship-based AS ranking. with more vantage points, more probing, cross-validation with conjunction with other sources of data, and more powerful data processing techniques to support larger topology samples.